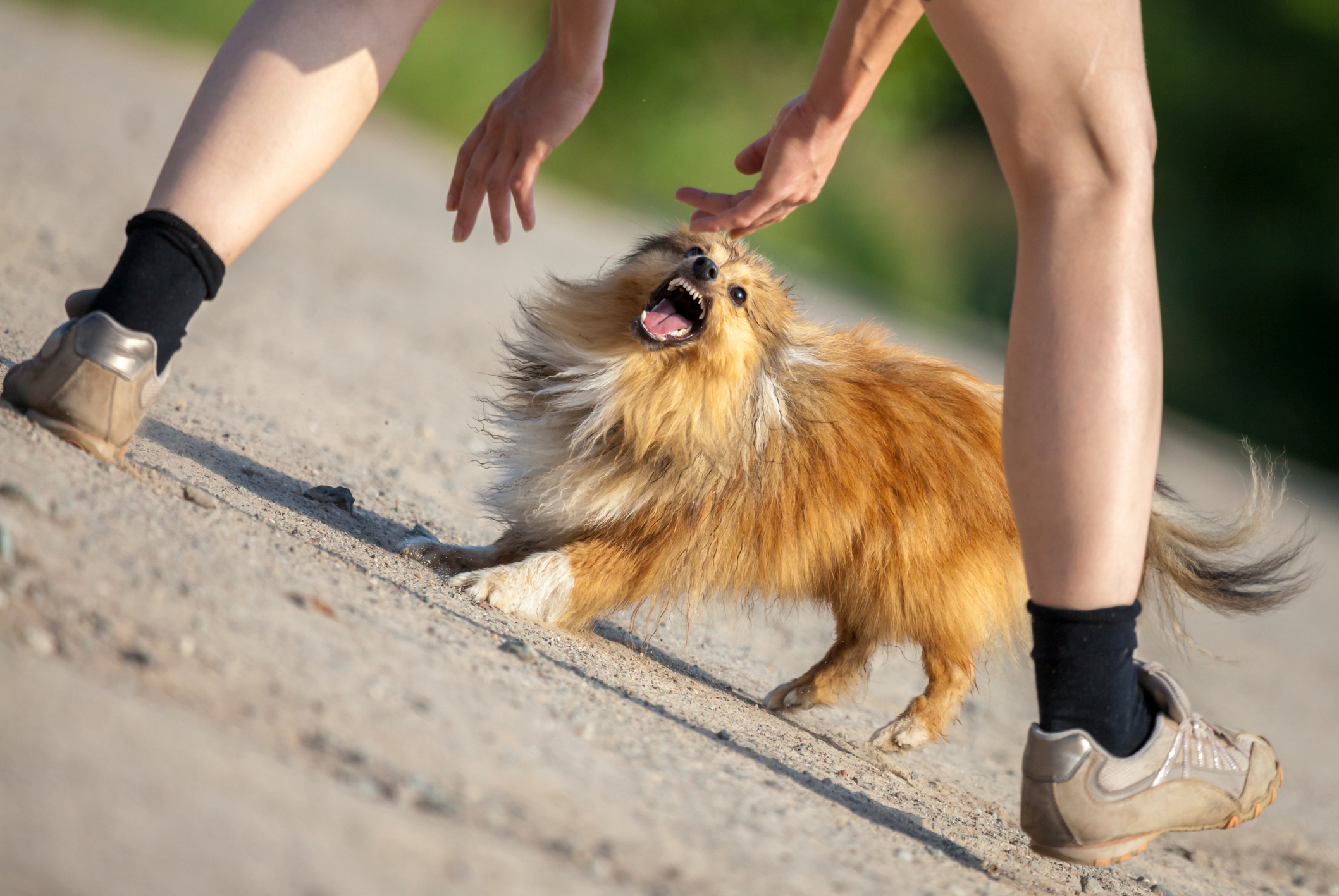 How To Deal With Aggressive Dogs.

If you have ever spent time on any outdoor activity focused forum or facebook group, the subject of people being bit by unruly dogs comes up quite often and is typically quite contentious. 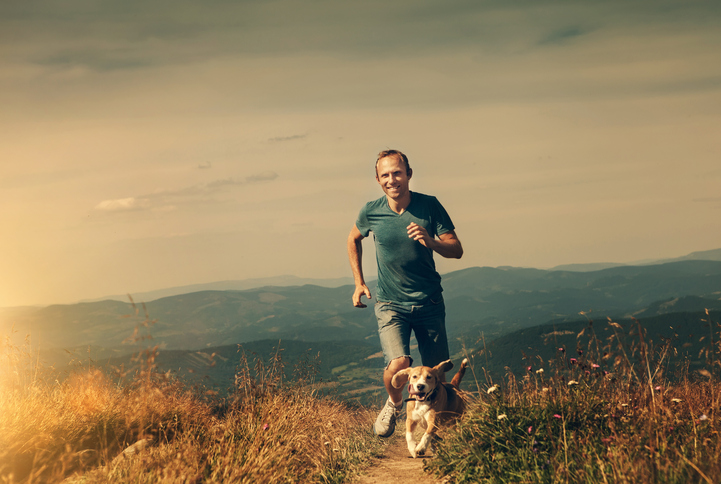 What’s surprising, honestly, is how many people claim to have been attacked multiple times. I mean, I’ve spent time on trails engaged in all manner of activities for over 30 years and in all that time I’ve had one dog come up and look like he was going to bite my ankle as I rode past. He didn’t. He just lunged at me. I stopped and had a discussion with the dogs owner, but it got me thinking… Maybe the people who are getting “attacked” frequently could alter their behavior a bit to reduce the risk.

A wagging tail does not mean the dog is friendly

Two quick thoughts. First, a wagging tail does not mean the dog is friendly. Dogs use their tail to communicate strong emotions, such as agitation, annoyance, and anger as well as happiness. Don’t fall into the trap that if a dog is wagging their tail it means they want you to pet them. It could mean the exact opposite.

Breed also means nothing. In our experience, the dog’s breed has little to do with it. A mean looking dog may be a sweetheart just as a sweet looking dog may be the spawn of satan. Try not to get too caught up in thinking that all X-Breed are evil. Dogs are as individual and unique as humans. Make determinations on if a dog is approachable or not based on their behavior not the shape of their head. Dogs are also a reflection of their owner. If the owner seems skittish, aggressive or is simply making you uncomfortable, the dog will likely have similar behavior traits.

We’d also like to clarify that, yes, there are aggressive and mean dogs out there, but our experience has been that most aggressive dogs are aggressive because they are nervous or afraid. Keeping that in mind, here are a few of our thoughts on how to interact with a strange dog that may be aggressive.

One of the biggest warning signs is a dog owner that tries to convince you their unruly canine is gentle or “just wants to play.”

When approaching a dog on the trail the first thing you should consider doing is slowing down. You should slow down for other trail users anyhow, but when a dog is involved it’s good for a number of reasons. First, when you charge at the dog, and their owner, a timid or protective dog may view the rate of speed at which you are approaching as threatening. This may exacerbate their anxiety and their need to protect their owner. Second, if the dog is super playful, they may view your racing by as something exciting to chase. Simply slowing down you’ll appear less threatening and/or less exciting. Dogs do key in on fear and this may just excite them further.

Are Your Spidey Senses Tingling?

You may be anxious because maybe you don’t much care for dogs, but if you are familiar with dogs and even if you are just ambivalent about dogs, trust your gut. Even if the owner… Actually, especially if the owner is claiming “Oh, she’s friendly. She just wants to play.” 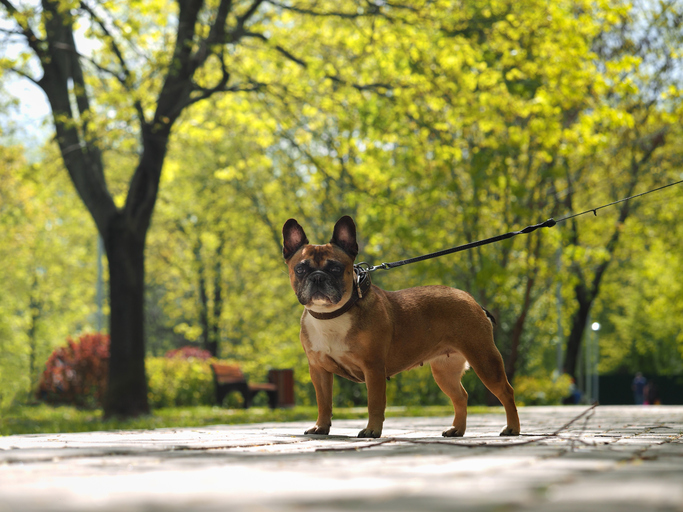 If the dog’s body language is telling you one thing and the owner is telling you another, pay more attention to the dog. And sadly, if the dog owner that tries to convince you their unruly canine is gentle this may be one of the biggest warning signs that the dog is timid, lacking socialization or struggling with fear/aggression.

Start the interaction off on the right foot by initiating a friendly tone. Avoid talking to the dog in a baby voice and opt instead for praise-based tones that a dog-caregiver would likely use on their own dog. A study performed by the University of Lyon and St. Etienne discovered that while puppies respond to “baby-talk” older dogs were less interested. We typically opt for a friendly “Hey, Pooch! Who’s a good dog?” kind of greeting.

Communication has worked for us 99% of the time. But if it’s doesn’t…. Well then…

Don’t wave your arms, put your hands out in front of you or kick your legs. And don’t yell and run away. This will just make things worse. Keep your arms down, but ball your hands into a fist to protect your fingers. Stand sideways and avoid direct eye-contact. Looking directly into the dogs face could be read by the pooch as an act of aggression. Keep your eyes neutral and use your peripheral vision. This is using body language to tell the dog that you are not a threat to them or their owner. At this point the dog may come right up to you and even sniff you without actually touching or biting you. 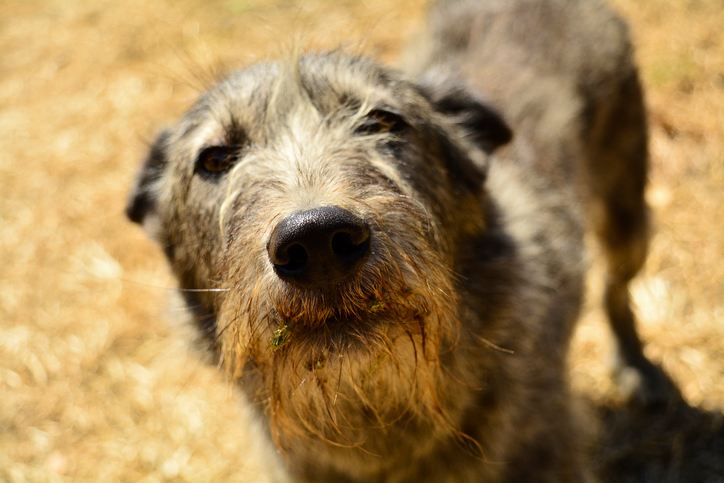 Looking directly into the dogs face could be read by the pooch as an act of aggression.

Don’t run away. Running away just excites the dogs’ prey instinct to chase and catch. Even if you had just misread the situation and the dog really was super friendly, running away is an invitation for them to chase you.

Also, avoid the temptation to scream and yell. This will just excite the dog even further. If the owner is trying to tell you that their dog is friendly as their dog is looking increasingly agitated, in a calm, but firm voice say something to the effect of “I don’t care if she’s friendly, get a hold of your dog!”

If you are regularly dealing with dogs or recreating in an area where dogs often are, never underestimate the power of distraction. Toss dog treats at the dog, or a water bottle or even a stick. The distraction usually entices the dog to go after the thing and leave you alone.

If it is continuing to escalate, this would be the appropriate time to become commanding with the dog. Not yelling or screaming, but in a commanding way like a Drill Sergeant, or your best Mom voice, to give common dog commands. “HEY! SIT! STAY! LEAVE IT!” or even “BACK AWAY” and “GO HOME!” may discourage or intimidate the dog. Continue to avoid eye-contact but show confidence. Remember, dogs sense fear, so even if you are terrified, pretend to be in control.

In the extremely rare event that nothing has worked until this point, you have to defend yourself. Simply spraying the dog with water from a water bottle is an amazing deterrent, but so is pepper spray. Lots of people think a firearm would be good at this point, but it’s really not. 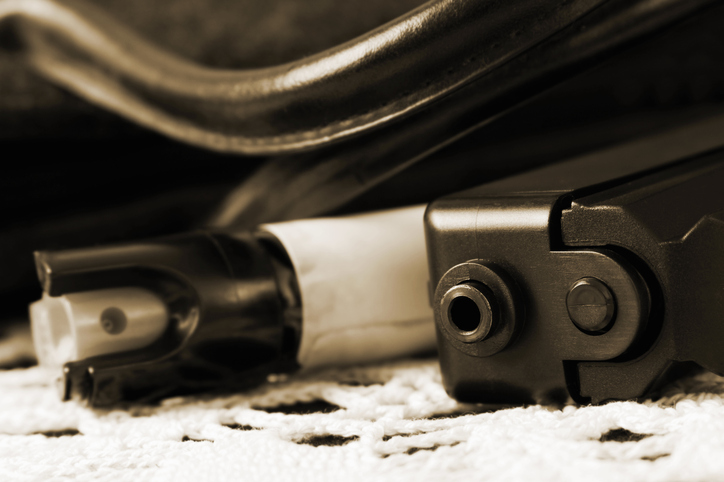 When it gets to this point your adrenaline is going to be pumping. If you do manage to brandish the weapon, chamber a round and release the safety, you will be so freaked out that you will most likely not be able to hit a single thing. Even trained military personnel only manage to achieve an alarmingly low probability of hitting their target. One source claims that in Vietnam for every 50,000 bullets fired there was only one kill. But let’s say you do hit something, statistically speaking, odds are it will be your own leg. Nonlethal measures will be more effective and you’ll be less likely to injure yourself.

If you are left with no other choice than to kick or hit the dog, aim for the throat, nose or back of the head. Don’t try and grab the dog by the scruff of the neck or anything like that. The dog will be able to twist and squirm around and still get a hold of you. Instead, use your weight to your advantage and hold the dog down, or try and grab their back two legs and hold them in the air.

But we really want to add that while a dog attack is a serious event, they really do not happen all that frequently, particularly if the less severe steps are taken first. The vast majority of dogs who appear as mean or aggressive are motived by fear, not hate and anger. Conducting yourself in a way that reassures the dog and minimizes their fear quickly diffuses most situations.

The Worst Kind of Escalation

One of the worst things you can do is, in an act of impatience or desire to get on with your day, is to charge past the dog and the owner because of a feeling that you shouldn’t have to alter your behavior for a stupid dog that should be on a leash anyway. While technically true, if the objective is to not get bit by a dog, then this attitude goes against your own self-interests. We can’t tell you how many times one of us has witnessed impatient trail users blustering past a nervous dog on a narrow section of trail and almost getting bit. The long and the short of it is that we all have to try to accommodate other trail users as best as we can, regardless if we agree with their activity, legal or otherwise. As my grandpa always said, “Is it worth being dead-right over this?”