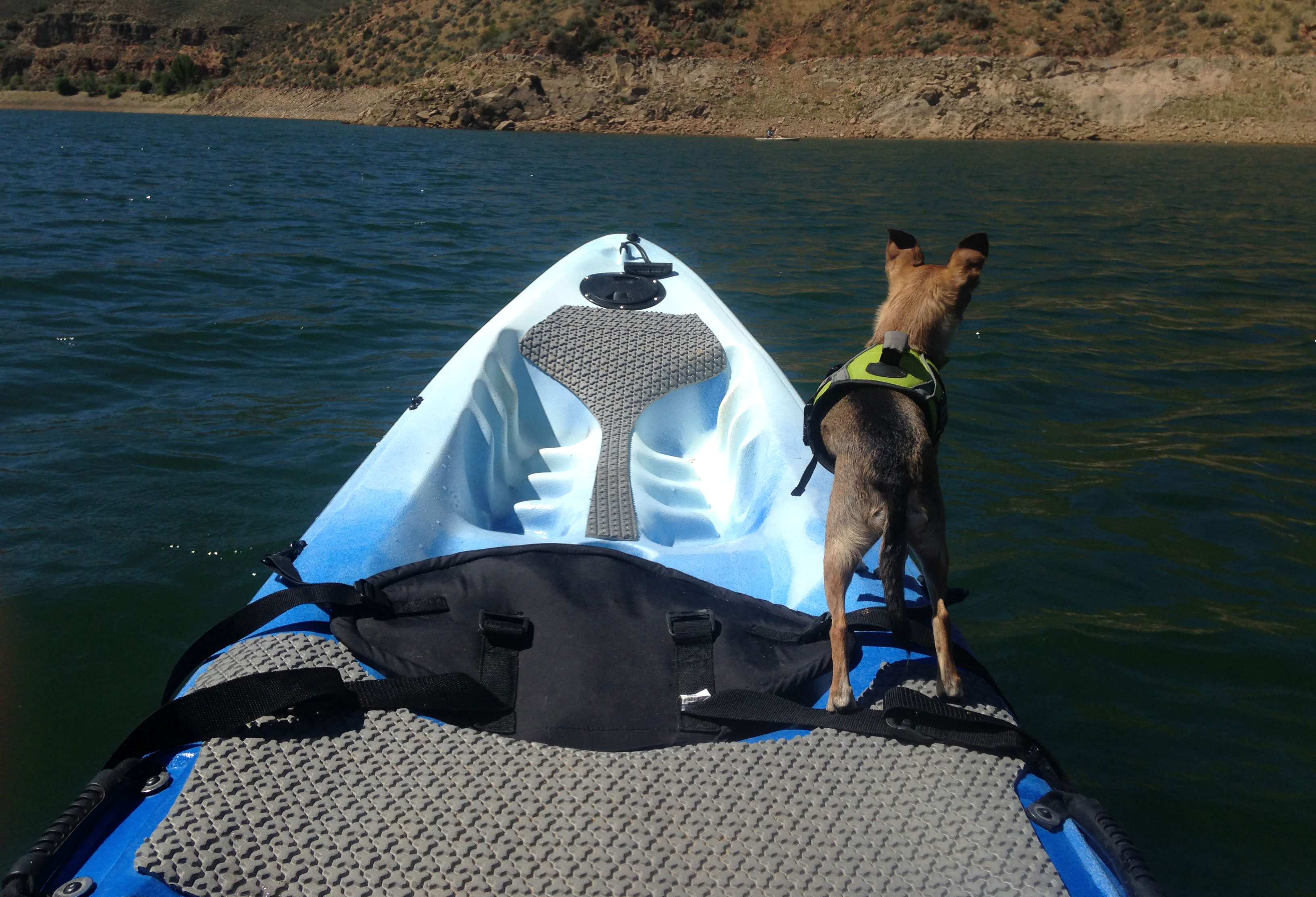 We originally found BlackTip Jetsports Traction Mats when looking for a solution for kayaking. The plastic surface of our Perception sit-on-top kayak was just so slippery that our dogs stuggled whenever we dealt with any kind of wave or even abrupt paddling.

We searched through a myriad of options designed for boat and jetski decking and settled on BlakTip Jetsports mostly because it was the most affordable option that also came with 3M adhesive backing.

It comes in a myriad of colors – we chose grey thinking that it wouldn’t get so hot if it sat in the sun, but in hindsight radiant heat doesn’t seem to affect this stuff so much, so we probably would have just gone with black.

Installation actually couldn’t be any more straightforward, and we ended up with a great result on the first try. Lets face it, this stuff isn’t exactly cheap, so waste not, want not. 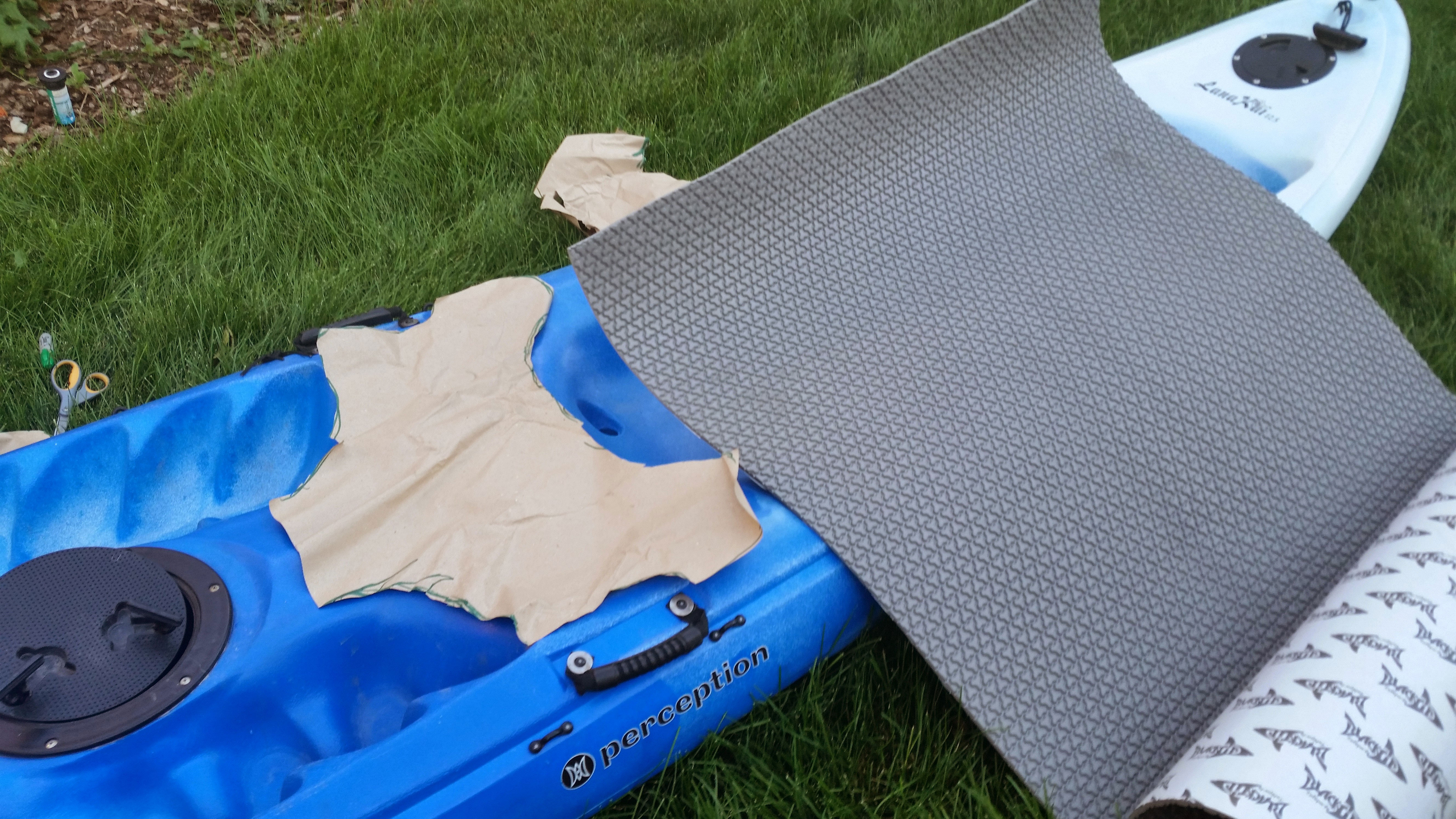 Orignially we tried cutting the mat with an exacto knife, but found a good pair of scissors was not only easier, but also more precise. We then cleaned the surface of the kayak using Paint Prep Spray. If you’ve never used Prep Spray, it’s a must have and has tons of uses around the house and garage. 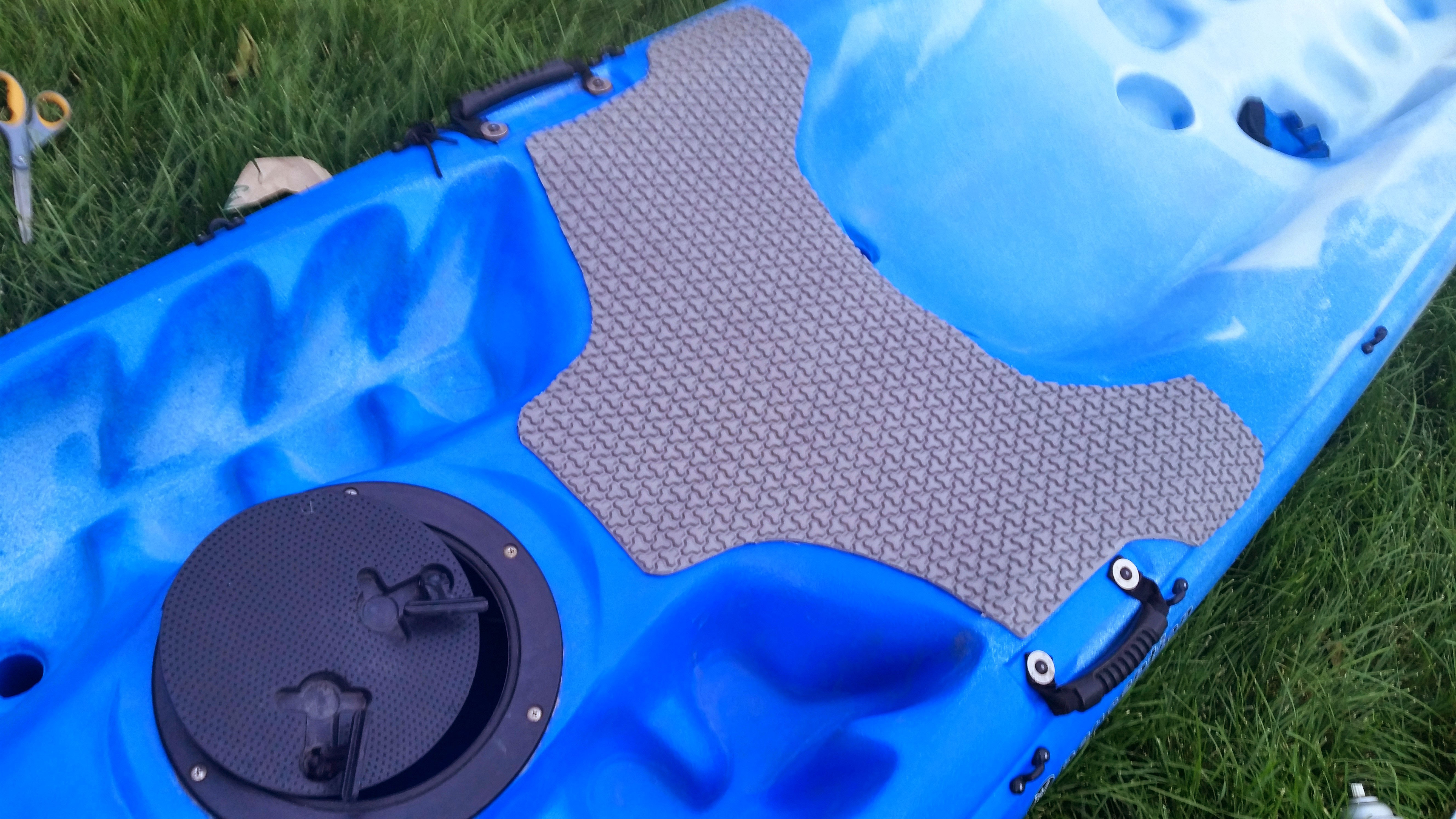 We went around and added traction mat just about any place any of our dogs would care to stand while out adventuring on the water. Almost immidiately, Chase was more comfortable standing on the kayak. 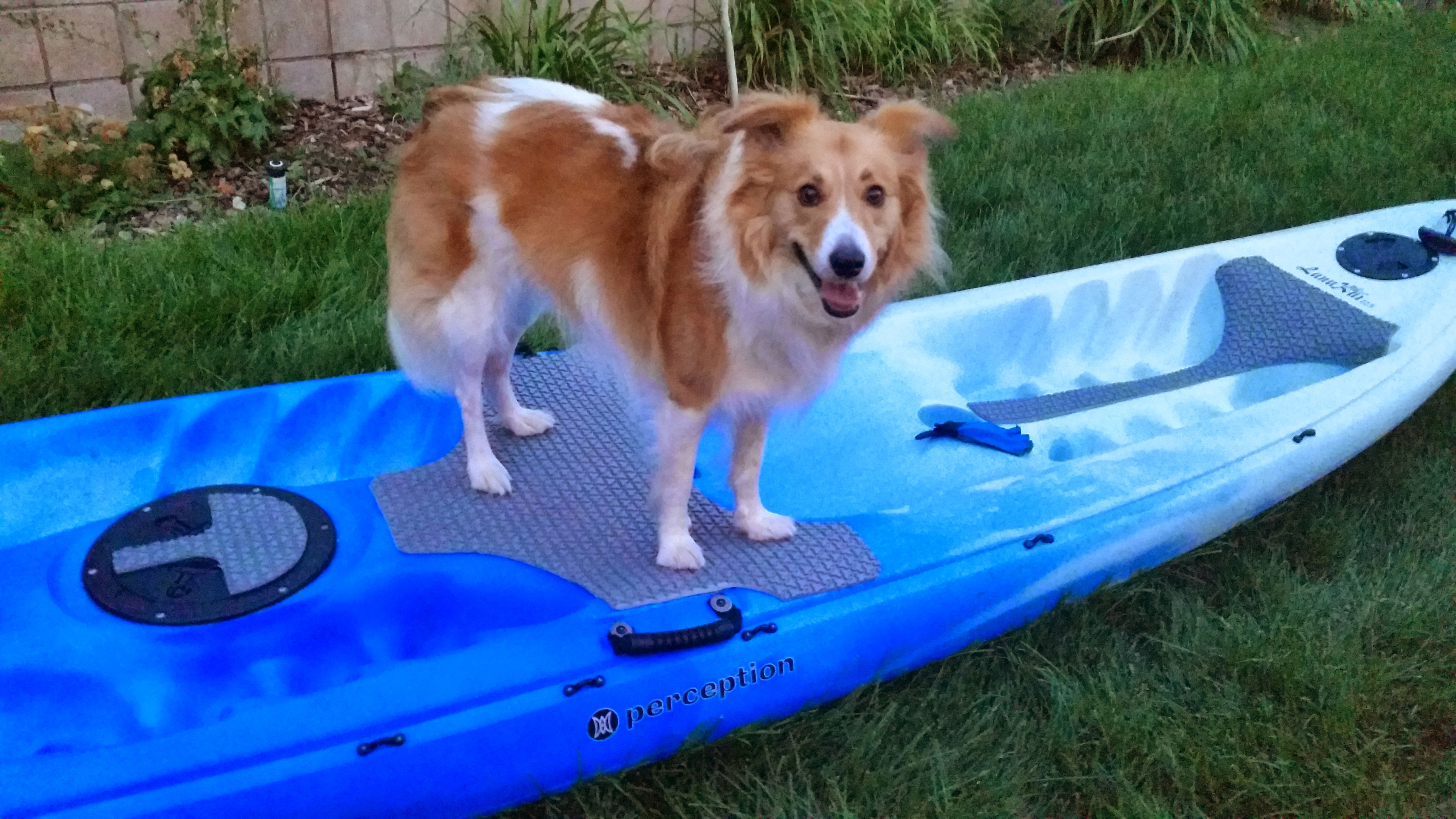 The 3M Adhesive backing on the BlackTip Jetsports Traction Mat made installation less than an hour long project. It’s also extremely grippy – it actually offers more traction when it’s wet, which is ideal for water activities. Finally the triangulated texture gives the dogs plenty of suface area to use thier toenails. Finally, the stuff is plenty robust. After several years of use, the traction mat still looks great.

Even after letting Pam and Jeremy take Kaylee (a 70lb super-athelete of a dog) out for a paddle. Initially she was very nervous, anxioulsy digging in her toenails. She eventually calmed down and despite all her efforts, she didn’t manage to do any damage to the traction mat – even though toenail marks could be found on the plastic kayak itself where there wasn’t any mat present. 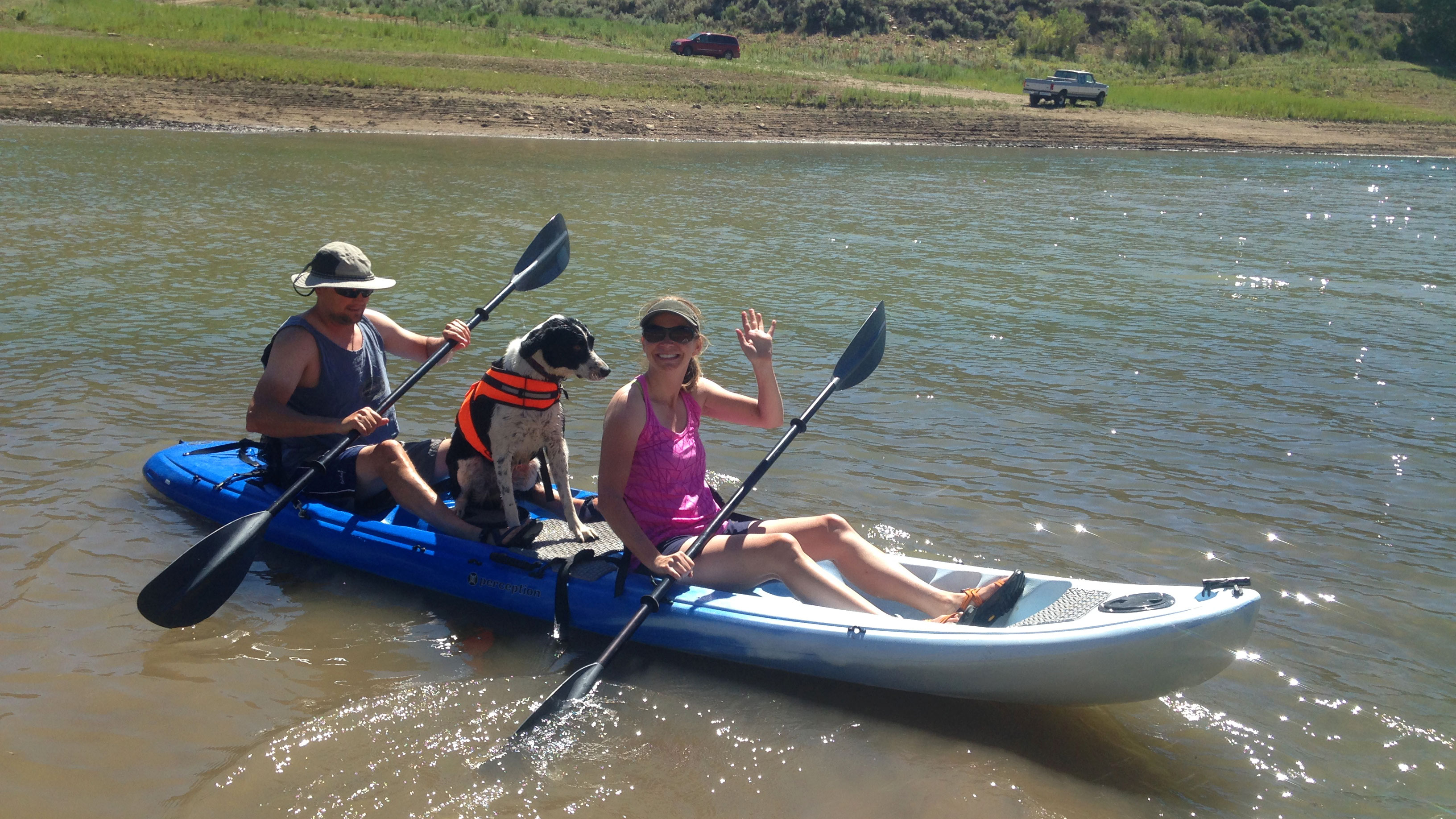 Anywhere Your Dog Could Use More Traction

After covering out Kayak, we still had plenty of the stuff left over, so we started looking for more places to apply it. And then it hit us! Our dogs spend a good deal of time in the back seat of our Toyota Tacoma. We normally lay down blankets to make things more comfortable for them, but the backs of the seats are just a hard plastic, and the blankets are prone to sliding around.

We used the same basic process, minus the butcher paper, to trace out the traction mat to fit perfectly in the recessed seat backs. 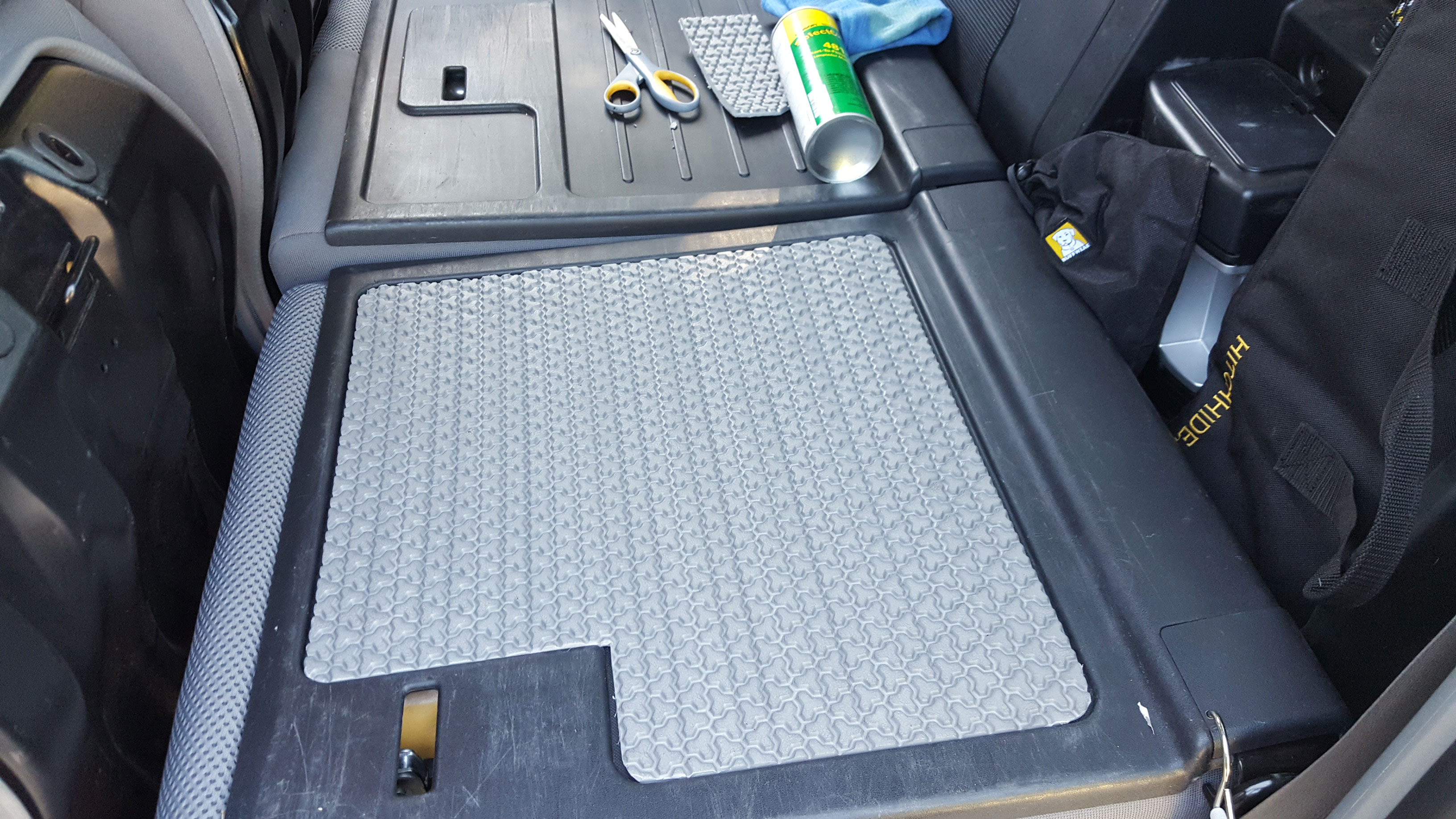 Once again, the product exceeded expectations. Not only do blankets not slide around, nor do groceries or anything else we happen to put in the back seat. The mat is super easy to clean, and even without any additional padding, the surface is far more comfortable for the dogs. 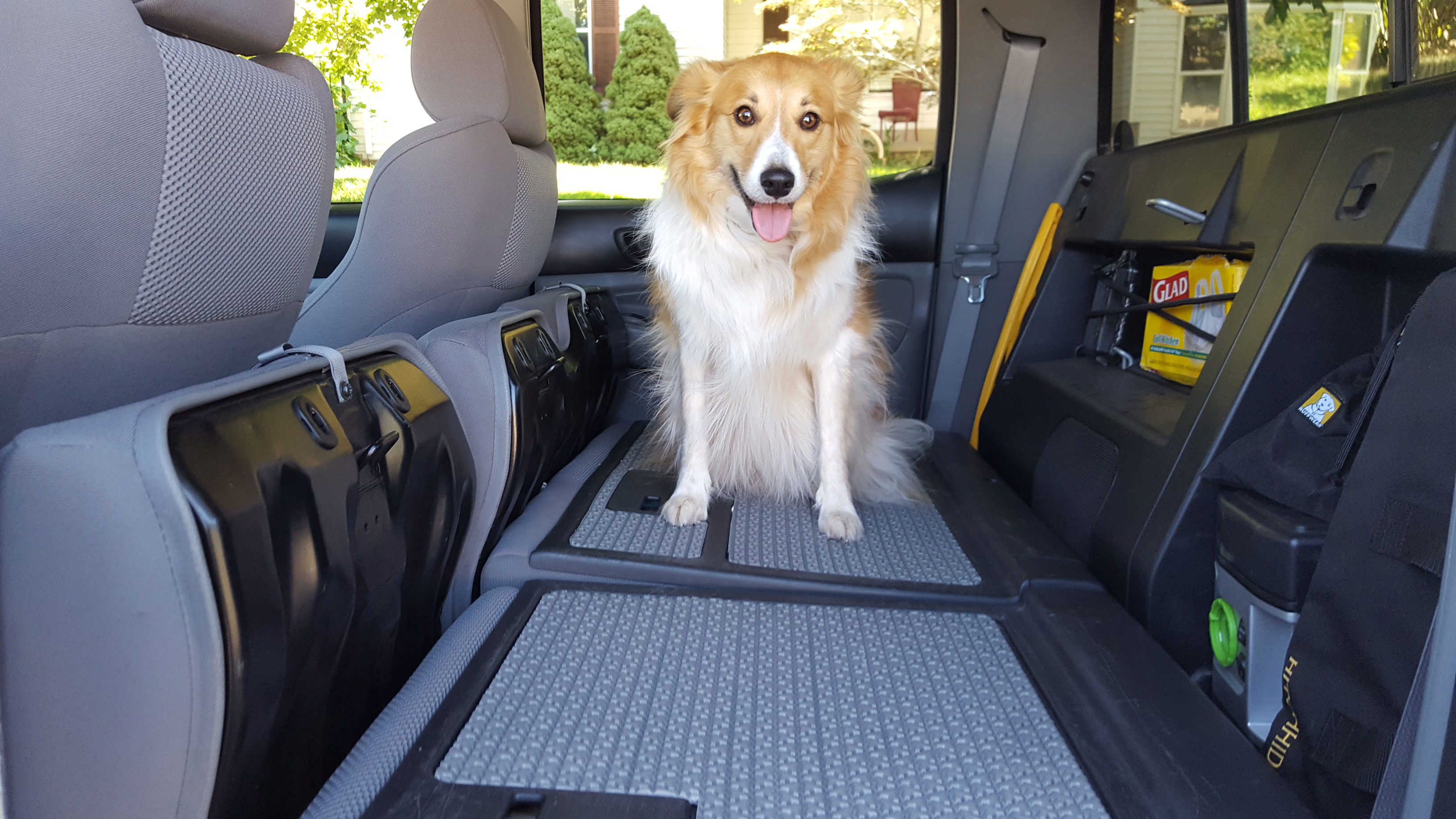